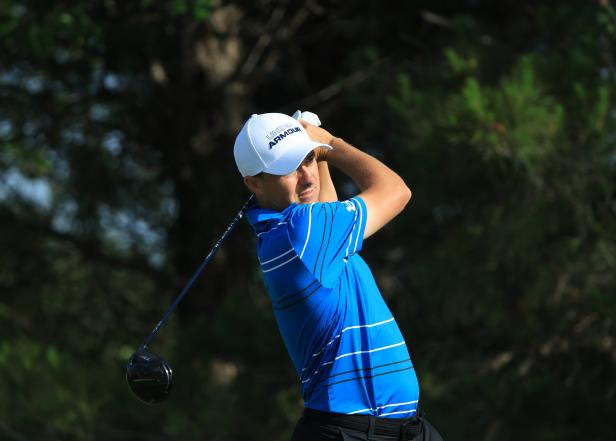 For a man who will stare down history next week, the past two days in Texas have served as an auspicious showing for Jordan Spieth.

Spieth, who would become just the sixth player in the modern era to complete the career Grand Slam with a win at the PGA Championship, turned in a 66 on Friday at TPC Craig Ranch, his two-round total of 132 near the top of the birdie-fest that has broken out at the AT&T Byron Nelson.

“Yeah, it has,” Spieth said after the round in response to if his play was to his liking. “I felt like I putted a lot better today, I missed my last three looks; I missed like a 3- or 4-footer on just a bad stroke on 7. And then had a decent chance on 8 for birdie and a decent chance on 9 for eagle. So certainly would have liked maybe those back to feel like … I felt like I played as well as I was scoring. So go back and hit a few afterwards, kind of dial it back in and go into the weekend and try and do the same thing I did the last two days.”

Spieth did have a handful of misses; he also gained over a stroke on the field in putting Friday after posting a similar figure the day before. Given Spieth’s short-game struggles—he entered the Nelson an eyebrow-raising 186th in SG/putting—it is a display he’ll gladly take.

Moreover, though it’s natural for golfers to look at the misses and wonder what if, there’s a flip side to that coin. Spieth’s Friday could have easily went sideways on his first hole of the day. A wayward drive placed Spieth’s ball near the base of the tree and his only move appeared to be a punch-out into the fairway. Somehow, that punch-out turned into a punch-cut that ran 160 yards onto the dance floor.

“I didn’t know how the ball got there. I thought it kind of was directly behind the tree from the tee box. … Anyway, I could line up maybe left side of the left greenside bunker, so if I could just get a good somewhat of a strike on it,” Spieth said, later adding, “​​When you spend a couple years having a lot of those shots, you start to learn how to hit ’em and so when you are playing better and you happen to be in a tough spot you get a little, you’ve had a little more practice. I guess is the best way to put it.”

Spieth is in the hunt, although it is a crowded leader board, and if Thursday and Friday are any indication of what awaits, players will need to go stupid low to have a shot at the Nelson title. In short: This rodeo remains wide open. In that same breath, with all due respect to the good people in Dallas, Spieth won’t be remembered for what transpires this weekend. What could happen next weekend could echo eternally.

Since finishing runner-up to Jason Day at the 2015 PGA, Spieth hasn’t come close to grabbing the Wanamaker Trophy (he finished T-3 in 2019 yet entered the final round nine back of eventual champ Brooks Koepka). But most of the PGA venues haven’t suited Spieth’s game, their emphasis on power rather than precision and creativity, and the courses that did fit that profile came when Spieth was in the wilderness.

Southern Hills is Spieth’s type of test, and his play this week—coupled with a win at the Heritage—proves he is in form. Thirty-six holes remain before a trophy is awarded, but the first 36 may have already produced a winner. Three other takeaways from Day 2 at the AT&T Byron Nelson:

The Nelson boasts one of the best fields on tour this season. So it stands to reason one of its contenders is a 40-year-old mini-tour journeyman.

That would be one David Skinns, who bounced around golf’s minor leagues for roughly 15 years. He worked as a bartender and delivery driver as recently as two years ago before earning his tour card last fall. He’s two days away from keeping that card firmly entrenched in his pocket, a Friday 63 complementing an opening-round 66 to sit at the top of the Nelson leader board at 15 under with Ryan Palmer and Sebastian Munoz.

“I don’t know,” Skinns said afterward when asked to explain the unexplainable. “I played well yesterday; that helped. I put a new driver in play on Wednesday and I think last week I was 154th in driving, which you can’t compete. And I realized my driver was broken; actually, the face was broken and I’ve been playing with it for who knows how long. … I drove it well yesterday and I felt like I could do the same again today, and I did and I got in a nice run there in the middle where I believe I made five [birdies] in a row. It’s one of them where you’re feeling it, you’re in the zone, and I just rolled it in to playing a nice back nine as well.”

Perhaps Skinns is being humble. In that same vein, Skinns has come out on the business end of his first go-around on tour. In 15 starts this season he’s missed the weekend nine times, his best finish is a T-29 at the RSM Classic and he entered the Nelson outside the FedEx Cup’s top 200. Forget keeping his card; Skinns needs some decent performances this summer just to make the Korn Ferry Tour Finals.

Of course, that was the projection before Thursday. Now Skinns is on the precipice of a career-defining weekend. He’s reached this point through the short game and through the short game alone, gaining four strokes on the field in SG/around-the-green and five shots through putting. While nice, it’s hard to sustain such stellar outings in those categories over two more days, and Skinns needs to get right with his irons (about field average through 36 holes).

For what it’s worth, Skinns feels comfortable with his game, and comfortable with this course. “It just fits my eye,” Skinns said. “I like it off the tee, the greens I’m really never second guessing my reads, which is great. When you look from one side and look from the other sometimes it looks completely different. But here it seems to look the same.” Should that comfort continue for 48 more hours … well, we don’t think he’ll have to go back to his delivery gig anytime soon.

Wesley Bryan no longer has his tour card, using up his medical exemption earlier this year. To get into this week’s tournament he had to Monday qualify. He’s not necessarily in the mix but he did make the weekend, and he arrives there in style.

Bryan came to his final hole needing to get up and down for birdie to make it inside the cut. Bryan did one better thanks to this ridiculous flop:

Bryan’s four-under 68 was good enough to move him 20-odd spots up the board. He would need something in the low 60s to sniff Sunday contention; still, two more solid days could go far in helping Bryan get his career going in the right direction.

Will Zalatoris entered as one of the tournament favorites. Alas, the local boy will not be around for the weekend.

The reigning Rookie of the Year had a so-so two days at TPC Craig Ranch, as his 71-69 total—while seemingly good on paper—could not match the fireworks from the rest of the field. Zalatoris missed the cut by one shot.

Also failing to advance to Saturday is Sam Burns. Entering the week second in the FedEx Cup standings, Burns was undone by an opening-round 73. The LSU product did bounce back with a 67 on Friday, but like Zalatoris, Burns missed the cut by one.

Bubba Watson and Matthew Wolff also saw their final PGA Championship tuneups cut short, as did Henrik Stenson and Kevin Kisner. Of final note was Justin Leonard. Making his first start since the 2017 Texas Open, the former Open winner and Ryder Cup hero opened with a 72 but couldn’t get into red figures on Friday to end his tour return.