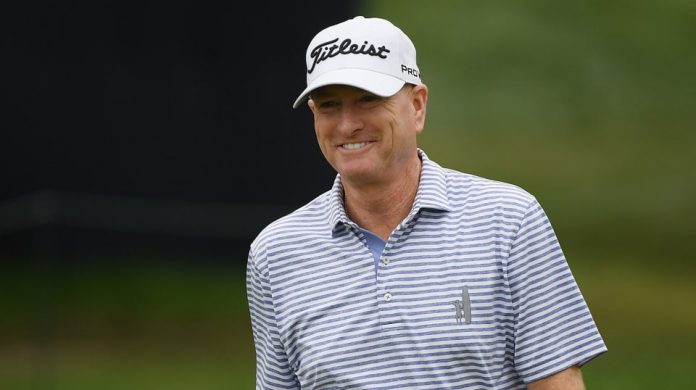 Steve Flesch was born in Cincinnati in 1967.

Which has little to do with the fact that he is a member of the PGA TOUR Champions. Or a left-hander. Or a University of Kentucky graduate and big Wildcats fan.

But it all has to do with one of the greatest pastimes of his life. One he would have loved to sacrifice his golf career for. And it explains why he got in the mood for the Champions Tour Shaw Charity Classic last week, which begins Friday with a round with two current Cincinnati Reds pitchers.

Think about it. Cincy in the 1970s. To a sports fan, it meant only one thing: The Big Red Machine.

When Flesch was a boy, his mind was filled with dreams of playing with a seamed ball, not Surlyn. He grew up on the Reds teams with Pete Rose, Johnny Bench, Joe Morgan, Davey Concepcion, Tony Perez and George Foster. Cincinnati tore open the Major Leagues and won six National League West titles, four NL pennants and two World Series during the decade of the 1970s.

“When I was growing up, everything revolved around the Big Red Machine,” said Flesch from Calgary on Tuesday. “I wanted to play baseball for a living, much more than I ever wanted to play golf. I was a pitcher / center fielder / first baseman. I was really quick. Not big, but very fast. I played baseball and I loved it. I loved team sports. “

Flesch lived a charming life in Cincinnati as a teenager. It turns out that his grandfather was a representative of MacGregor Sporting Goods, the main baseball glove maker in the 1970s and 80s. And yes, he served the reds.

“He took me to the Riverfront Stadium a couple of times a year,” said Flesch. “Ernie Stowe was the Reds’ locker room manager and my grandfather would make sure they had what they needed.

“So here I am, walking freely in the Big Red Machine locker room. I look at the bats and the gloves from Rose, Bench, Foster. This is a young child’s dream. I’m 8, 9, 10, 11 years old and am strolling through this locker room. I’ve always been a passionate Reds fan. “

How passionate? “My son and I watch the games every night. I literally plan my nights so that I’m home at 7:10 pm for the first pitch. “

Flesch was a four-time winner of the PGA TOUR and at some point made friends with former major league pitcher Chris Welsh, who became a TV and radio analyst with the Reds after his professional career.

According to Flesch, Welsh is a left-handed friend and a decent golfer. Flesch often gave him clubs to try out, and Welsh often invited Flesch to play with ex-Reds who still lived in the Cincinnati area, such as Paul O’Neill and Bronson Arroyo.

Last week, Flesch received a call from Welsh, asking if he would like to play golf with current Reds pitchers Wade Miley and Sonny Gray. Of course he jumped on it.

3 rules for drinking on the pitch, according to a PGA...