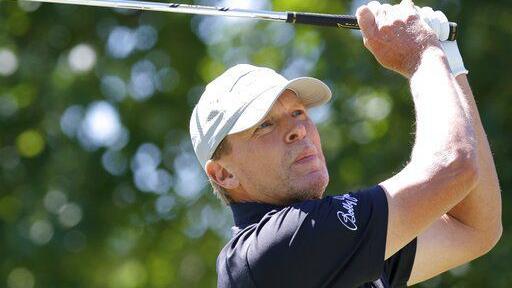 Steve Stricker tees off in 3rd place on the final day of the American Family Insurance Championship on June 13 at University Ridge.

Steve Stricker extended his lead in the Senior Players Championship to five strokes on Friday after opening a 7 under par 63 with a 68 at airy Firestone in Akron, Ohio.

The 54-year-old U.S. Ryder Cup captain and resident of Madison had a total of 9 under 131 on the difficult South Course and played without a bogey for the first two rounds.

“Today was a bit more exhausting,” said Stricker. “I didn’t do a bogey, but I made some good saves for pars to keep the loop going. Just two birds. I didn’t really use some of the good shots I hit there today. “

The tournament is the third of the five majors on the PGA Tour Champions schedule. Stricker has six senior wins – two of them major championships – after winning the PGA Tour 12 times.

“I just have to keep doing the same things,” said Stricker. “Get aggressive when I can and play smart like I did and just try to do the same things that I did the first few days.”

Paul Broadhurst finished second with 4 under after a 69. The 55-year-old Englishman has five championship wins – two of them majors – after winning six times on the European Tour.

“I think there is a case where he (knitter) has to go back on the field instead of catching him,” said Broadhurst. “You won’t hit every fairway, you won’t hit every green, so a couple of laps under par made me happy.”