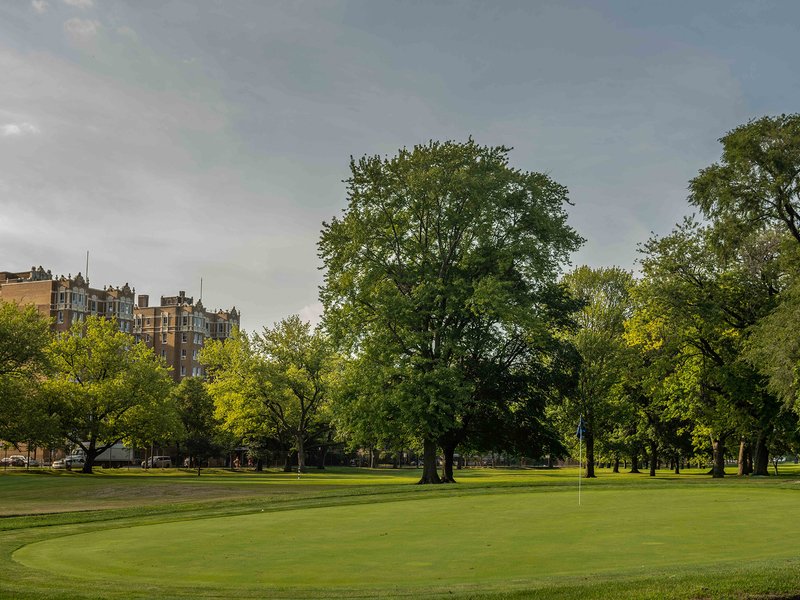 They argue that the Obama Center’s long-delayed groundbreaking will end political uncertainty and show that the area is ripe for investment. But the same conservation groups that have hampered the Obama Center for years could turn their attention to the proposed course.

Supporters say their proposed mashup of Jackson Park and South Shore golf courses would draw the attention of championship golf and accompanying media to the city and add to the economic boom Obama envisioned for the South Side around his presidential center. Opponents say such a conversion would eliminate an affordable neighborhood golf course and threaten old trees and adjacent protected areas in the park.

City and Chicago Park District officials declined to comment, and Woods’ company did not respond to inquiries. Having just weathered political and legal battles to begin building the Obama Center – a legal challenge still continues despite judges rejecting recent efforts to stop the groundbreaking – few are anxious now yet to enter, say sources close to the project and the city hall.

Renovation plans were first announced in 2016. Then-Mayor Rahm Emanuel and Park District CEO Mike Kelly hired the Chicago Parks Golf Alliance nonprofit to raise more than $ 30 million to pay for. The group is led by NBC golf analyst Mark Rolfing and board members include Carrie Williams, director of the Illinois PGA; John Kaczkowski of the Western Golf Association, sponsors of the BMW Championship and the Evans Scholars Foundation; and Mike Keizer, founder of the prestigious Bandon Dunes course in Oregon.

In 2017, Woods unveiled its design to convert the nine-hole South Shore and 18-hole Jackson Park courses into a combined par 70 championship course nearly 7,400 yards long. It offers breathtaking views of the city skyline and the lake, with a short course for families. With wide fairways and a challenging lakeshore breeze, it had the potential to become “America’s largest urban golf course,” according to Golf Magazine.

While Woods himself said the former president approached him about the project, Obama (a golfer and honorary member of Beverly Country Club) declined to comment through his foundation. However, a spokesman said foundation leaders hope the Obama Center will stimulate investment “across the South Side” and “bring all kinds of amenities to the area,” including golf.

Ald. Leslie Hairston, 5th, says, “The community is ready to see the work begin. I’ve been talking to the golfers the whole time. They look forward to the start. We’re just waiting to get all of our ducks in a row. ”Hairston expects the park district and Mayor Lori Lightfoot to resume public engagement on the proposal. Renewed community meetings could “bring everyone back into the community,” she says.

Supporters point out that the course will require some of the most important and expensive upgrades – two underpasses on Jeffrey Avenue and South Shore Drive on 67th Street – that are already included in planned upgrades around the Obama Center.

The trends in golf are also promising. After years of declining game and course closings, golf experienced a boom as people looked for outdoor activities during the pandemic. According to the market research group Golf Datatech, the number of rounds played this year is 19% above the 2017-19 average. Fee income for courses in the Chicago Park District increased 20% between 2018 and late 2020.

The project “would have to cut a lot of trees,” said Brenda Nelms, co-president of Jackson Park Watch. “I think there would be suits depending on how it was structured. Even though it has Tiger Woods’ name on it, I don’t think there would be as much public approval as there was for the Obama Center. “

Despite the park district’s promises, Nelms doubts the cost – currently $ 21 for the weekend game in South Shore and $ 35 at Jackson Park – would remain affordable for locals.

Torrey Pines in San Diego is one of the best urban places to host PGA tournaments. San Diego County residents pay between $ 32 and $ 78 to play, depending on the course, player age, time, and day of the week. Non-resident fees range from $ 76 to $ 252.

Industry adviser Bill Daniels, founder of Golf Chicago Magazine, says the Jackson Park location is not suitable for championship games. “The country’s flat pool table,” he says. Daniels would rather see the Parkviertel revamp the existing course: strengthen the coastline, improve irrigation to prevent flooding and drying out of the fairways, and repair muddy bunkers.

While it’s not impossible, making a tour-caliber course playable for weekend hackers is doubly difficult, says Ed Stevenson, former chief executive of DuPage’s Forest Preserve District. He carried out a $ 16 million renovation of the former Oak Meadows Golf Course in Addison to address issues like those of Jackson Park and South Shore. “It’s a design challenge to be multiple things for multiple groups of people,” he says. To be good enough to attract PGA tournaments while keeping the place friendly for duffer “seems like potentially conflicting goals”.